A thousand year old tradition, a festival that celebrates the happiness and development of young girls 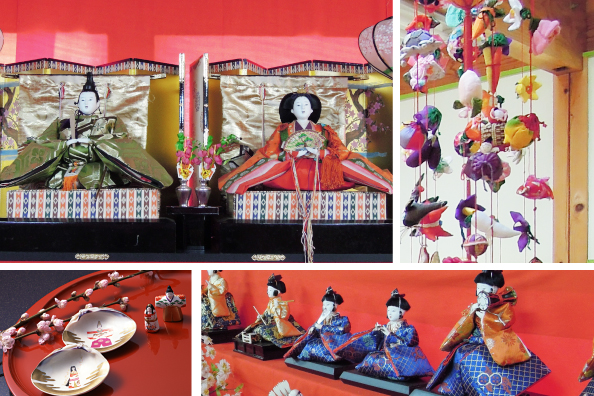 In Japan, March 3rd is the Doll Festival when families celebrate the healthy development of young girls (also called peach festival). The norm is to decorate with dolls from around February 4th to March 3rd and eat chirashi sushi (vinegared rice with scattered ingredients) and drink clam soup on the day of the festival.

History of the Doll Festival

The history of the doll festival dates back to over one thousand years ago.
It is said that "doll" comes from "doll playing" that was popular among young girls at the time. Young girls played with toys that mimicked things around them such as dolls and court, which is the modern day equivalent of playing house. During the same period, during the first ten days of March, there was the custom of praying for good health. People prayed to the gods of heaven and earth, offered seasonal food and sent human-shaped dolls made from paper and bamboo, symbolizing their misfortunes to the ocean or rivers.
The above customs and recreations overlapped over the years and eventually became the Doll Festival.

Dolls
Used as substitutes to bear misfortune, dolls became a luxury beginning in the Edo period and evolved into their present day forms. There are a variety of different types of dolls.

Flowing doll (nagashibina)
Made in human forms, these are floated down the river; it is said to be the origin of the Doll Festival.
Standing doll (tachibina)
The primitive form of dolls; originally made with paper, so they were also called paper dolls.
Sitting doll (suwaribina)
The most representative of modern dolls; most of the dolls sold in doll houses are this kind.
Hanging doll (tsurushibina)
Hanging dolls are made from scraps of kimono and connected by strings to decorate bamboo rings; in the Edo period, doll decorations were restricted to certain regions and it is said that the beginning of hanging dolls originated from families that could not buy dolls who then used scraps of cloth from kimonos to make these.

In addition, fitting with the life style of the modern day, a variety of different sizes and styles are available, such as the more compact version of the old-fashioned seven-tiered doll stand.

Offerings and food at the Doll Festival and their meaning 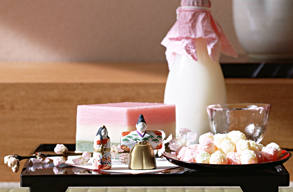 Peach blossom: Ward off evil
White sake: purge evil from the body
Kusa mochi: aroma of the wormwood would purge evil
Hishi mochi: symbolic of the heart, represents the longing of parents when thinking about their kids; white symbolizes the land, green symbolizes the buds on the trees, pink symbolizes life; it is said to absorb energy from nature
Clam: two shells only overlap perfectly when they are from the same clam, thus it symbolizes chastity and a good match
Hina Snow Pellets: the same meaning as the three colors of hishi mochi, able to absorb energy from nature

Hamamatsu "Doll Exhibition" Detail for...
Doll Festival has always been the occasion to ward off misfortune and pray for happiness. Each family celebrates differently. If you are at home, why not try it at home? 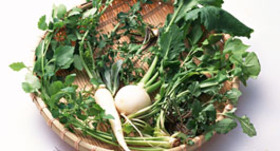